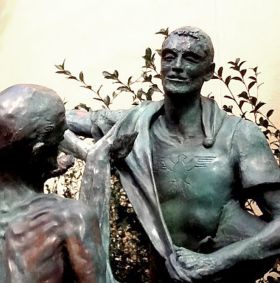 SAINT MARTIN AND THE BEGGAR

It was a chance meeting between Rector Michael Wright and me which led to the creation of this piece. Michael is Rector of the historic Grace Episcopal Chuch on Wentworth Street, just west of King. In 1936 the Church was adorned with bronze doors depicting the Good Samaritan. There was a desire to extend the theme into the adjacent courtyard.

Most European versions of the encounter of Martin and the Beggar, depict Martin mounted on a horse. I wanted a more personal exchange; thus, the Beggar straining to accept the cloak which is being separated by Martin.